The Timing of the 2 Beat Kick

Over the years, some of my most referenced and linked posts has been in regards to the two beat kick in swimming (You can read it here and here if like). The two beat kick tends to be a pretty popular topic among triathletes working on their swim, as a minimal but effective kick can help save the legs for the rest of your day. What is not discussed however, is the timing of the kick.

I know for some that it’s hard enough to just pull correctly and do the two beat kick at all, let alone change the timing of it. But by altering the timing of the kick creates two entirely different strokes, so I thought that it would be at least worth addressing.

Before I start splitting hairs though, for those who aren’t familiar with the term, a two beat kick in freestyle is when a person kicks one time per arm pull, or two times per arm cycle. 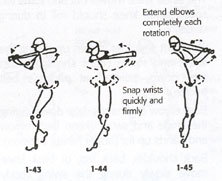 Now, there are two ways to perform this kick. The first and most common, is with a shoulder driven stroke. The other is with a hip driven stroke. What’s that? Well, have a seat. Let’s discuss.

A hip driven stroke, or ‘swimming from your hips’ is a term that has been thrown around a lot lately, and isn’t fully understood, even by a good number of swim coaches. Often the idea of swinging a bat or golf club get used at the analogy, to give the idea that the motions are the same and that the power generated from the hips in swinging a bat/club is the same motion in freestyle to generate power in your pull. It’s not. One is a mostly static arm coming horizontally across the body by means of the twisting abdomen, the other is an arm moving vertically down the body by means of arm and back muscles.

Hip driven swimming is where the foot (read:kick) anchors the lower part of the body so that you can start a twisting motion to rotate the body, so that you can engage more of the back muscles (lats) in the pull. The kick and the pull work in unison to drive a bigger, more powerful stroke. The “hip drive” of this stroke largely comes from the kick, but the coordinated effort between the pull and hip/kick create and accelerated rotation and helps drive the next stroke. Hence the hip and bat swing analogy. Bigger rotation, more powerful pull, slower turnover, and often a lopsided stroke are signs of this stroke.

Shoulder driven freestyle is where the shoulders and upper body are more or less solely in charge of the rotation. The kick acts as a counterbalance to keep you positioned correctly. Because of this, the stroke is much flatter in the water and the turnover is much higher. This is the stroke most people do, and in the world of triathlon, where poor kicking is the norm, this type of stroke reigns supreme.

Now, on paper that’s all fine and good, but swimming is a tricky thing to translate from the paper to the pool, so I thought I would give you an example of both strokes in the same length, so that you could see the difference side by side.

For the first half of the length I am swimming with my shoulders. Notice the flatter stroke and higher turnover. Triathlon coaches sometimes (and wrongly) point to this stroke as better for open water. The reasoning is that the higher turnover keeps momentum up in choppy water. With no pauses and one paddle (hand) always pushing you forward, you’re less likely to come to a stop from a wave or chop hitting you.

In the second half of this length I switch over to a hip driven two beat. You’ll notice right away the stroke-rate drops and you notice a bigger rotation develops, but because of the coordinated effort with the hips and shoulders the stroke is more powerful, generating more power in each pull with no more added effort. Because of that slower turnover and seemingly longer pause between each pull, some feel that this isn’t as well suited for open water as a choppy course could cause a start/stop effect. But if this stroke produces less drag and more power then the net result will be a faster swim. (I’d add that close quarter swimming is often more conducive for the shorter stroke length, higher turnover of the shoulder driven stroke so as not to get tangled up, but waves can and should cause you to adjust your timing so that your not fighting the waves as much.)

The difference between these two strokes is the timing of the kick. For the shoulder driven stroke, the kick of the right leg occurs about the time that the left hand enters the water, or the kick and pull of opposite arms/legs occur about the same time. For the hip driven stroke , the right leg kicks about the same time as the right arm begins to pull, or the kick and pull of the same side begin together. So one is opposite and counterbalancing the rotation, while the other is emphasizing the rotation. Subtle timing change, big difference in stroke.

Having said all of that, the stroke you attempt will be largely determined by the stroke you already have. If you kick for shit or even go backwards when you kick with a board, then shoulder driven is an easy choice for you. Trying hip driven will likely stop you in your tracks and frustrate the hell out you. If however, your kicking is solid, the hip driven stroke might just be your bag. Either way, changing up timing is like learning a new dance, so give it some time. Lots of time.