Triathletes are notorious about having a horrible kick. With as much as they condition their legs in cycling and running, you would think that they would be especially strong at kicking. They try and muscle through it and they kick too much. In distance swimming, the point of the kick is for balance and to help with rotation. It is not for propulsion.

Problem is good kicking requires good flexibility, not huge muscles. Most hear “kick from the hips” and begin a running type motion with their legs. While the kick does orignate from the hips (think of a soccer kick instead of a running motion), the hip motion is rather subtle. The bulk of the work is done by the ankles. Take a look at a rather typical kick performed correctly 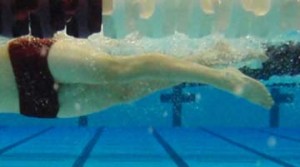 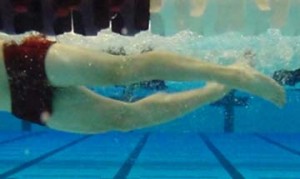 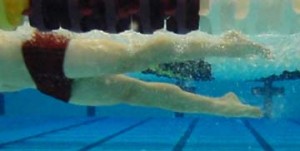 Notice how there is a subtle bend in the hips, subtle knee bend, but a large flex of the ankle. Like a fin, the power is generated from that whipping motion. Without that, you are just stirring the water with your legs.

One of the biggest obstacles for triathletes is flexibility in the ankles.  Afterall, it’s not really a requirement for cycling or running. So what’s the easiest way to fix this? Couple of ways. First, start doing kick sets with fins. Nothing fancy. Just good ‘ole black, rubber fins. Not Zoomers. Let me say that again. NOT ZOOMERS. Regular length fins will stretch the tendons, ligaments and muscles in the ankles. Zoomers don’t do anything but help you keep up with faster people in your lane .  During the kick sets you want to really focus on generating the power from your ankle. If your ankles start to hurt during the set, then you’re doing it right. Having trouble working just the ankles? While you’re kicking with fins, put on a pull buoy. Yes, a pull buoy. If you can’t keep the pull buoy in place while you kick then you have something new to work on. Once you get it down, it may help isolate things a little better.

The other big problem is the timing of the kick. As I stated previously, the purpose of the kick for a distance swimmer is balance and rotation, not propulsion.  If you thought you were propelling yourself with your kick, go time yourself in a 100 yard kick and and 100 pull and compare the two. So, if the goal is to use the kick to rotate from one side to the other, it makes sense that one well placed kick in conjunction with with your pull is all you should need to rotate back and forth. This is called a two beat kick. Swimmers lacking a solid kick have trouble reducing the engine down to a 2 beat. Often you see a 4 or 6 beat kick doing the same work as a well performed 2 beat. If you can’t pull off the 2 beat and you throw in a few more kicks because you can’t get the timing down, what’s the big deal? The big deal is your quads. They are very large muscles that eat up a ton of oxygen and calories to achieve nothing a two beat kick isn’t doing. Eliminating wasted energy is that efficiency goal that we all work towards.

Happy with your six beat kick while you swim and are not going to worry about it? That’s ok too. Thanks for the 4 minute lead out of the water…