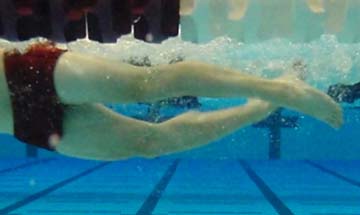 Back in February, I wrote about the importance of the kick and what you can do to improve it. (If you missed it here’s the link). Recently, I have been getting a number of questions about the frequncy and timing of the kick, and more specifically, the two beat kick.

Generally speaking, when someone starts swimming, they tend to have their head and shoulders riding very high in the water with the hips and legs dragging behind (poor balance). Poor rotation and a horrible streamline are also pretty standard. To compensate for this, the swimmer will kick a little harder to bring the hips up and to try and generate a little more propulsion. My experience is that this comes in the form of the 4 beat kick (2 kicks for every stroke). As the swimmer gets better, the body position improves and the streamline gets better, but the kick doesn’t seem to change. Why? well my experience has been that its the rhythm that’s so hard to break. Its just a classic bad habit, and it makes it very difficult to change up your tempo on the fly once the habit is formed.

So what’s the big deal? Who cares how many times you kick? Well, there are a couple of big reasons, so let me explain the function of the kick first.

The purpose of the your kick, at least in distance swimming, is primarily rotation and a little for balance. There’s not much in the way of propulsion. When you rotate to one side, the leg kicks to start the rotation in the other direction. The better the kick, the better the rotation. (People are often told to rotate from the hips, and I have no issue with that. I think it’s more of a mental image that anything. Try and rotate your hips without using your feet or arms and you will see that it’s impossible, which brings me back to the kick. ) That same downward thrust will also raise the legs and hips if needed, however, the better you get in the pool, the less that is needed.

With a 2 beat kick, your bottom leg (leg closest to the bottom of the pool) kicks shortly after the arm begins its pull. So your right arm enters the water and right after it begins its pull, the right leg applies one swift kick. That one, powerful, well placed kick is all you need to begin rotating to the left side. If you have a 4 beat kick, that means that your bottom legs kicks to start the rotation and the top leg immediately follows and COUNTERS that kick, slowing or hindering the rotation. People with a 4 beat tend to struggle more with a good rotation as their kick isn’t helping as much as it should. The 6 beat kick allows for two kicks toward rotation, and one to counter, so you are netting out a solid rotation. Anything more than that and you are swimming from a shark in an all out sprint.
Trying to get a good visual of that kick? Think of kicking a soccer ball with your bottom leg. Swift deliberate and powerful. Of course the flexibility of your ankles come into play as well.

Now we all know that the quads are some pretty large muscles, and while they can generate some pretty powerful movements, they also burn up a serious amount of oxygen. So, if you are generating a lot of power and burning a ton of oxygen, but aren’t getting much benefit from it (propulsion) why wear yourself and your legs out? This, in my opinion, why the 2 beat kick is so important to learn if you are doing triathlons or swimming long distances.

Alright, so lets take a look at the two types of kick. First off, take a look at Michelle’s freestyle. She has a great stroke and has really improved over the last 2 seasons.  In the video, she is swimming a little faster than 1:20 per hundred yards and quite comfortable. Clearly no slouch. Pay attention to the kick.

Now, take a look at a two beat kick. In this clip I am swimming about 1:12 per hundred yards.

The differences are pretty subtle between the two strokes top to bottom, but Michelle has a 4 beat and I have a 2 beat. Who looks like they’re spending more energy?

A lot to think about here, but hop in the pool and give it a try. So, at what level of a swimmer should you try to work on getting into a 2 beat kick?  I think you should learn it from the start. It seems like breaking the habit of the 4 beat kick is like quitting smoking, based on the swimmers I help.

Good Luck and let me know if I can help.