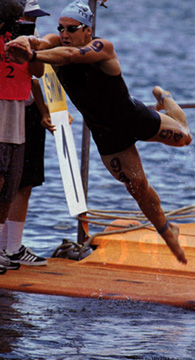 TJ Fry began swimming competitively at the age of 6. He was a 12+ time high school All-American and went on to be a scholarship athlete at Clemson University where he was team captain and two time MVP.

In triathlons, he competed in his first triathlon at the age of 12. At 14, he was first overall at the Ironkids National Championship. The following year earned a spot on the junior national team to represent the United States as the yougest ever in the first ever Triathlon World Championships, and repeated the achievement the following year. Upon completing collegiate swimming career and obtaining a degree in Biological Sciences, he returned to triathlon as a professional.

As a pro, TJ used his swimming strength to lead out of the water, breaking some course records along the way (Wildflower, Buffalo Springs, etc). He was able to rack up victories and solid results all over the world, competing in a range of formats from ITU World Cup to sprint distance to the Hawiian Ironman.

Injury ultimately sidelined his career prematurely, but TJ continued in both swimming and triathlon as a coach. In swimming, he coached a number of top-16 swimmers and All-Americans. In triathlon TJ coaches professional and amatuers alike. He qualified athletes multiple times to both the  Ironman World Championships and the 70.3 World Championships as well as first timers crossing the finish line of their first race.

TJ currently races on a more recreational nature now, does limited one-on-one coaching, puts on a number of clinics and offers up any advice he can to help out. He’s also a 10 time Ironman finisher (3X Kona)

TJ is a real estate professional and the owner of  South Coast Endurance (www.southcoastendurance.com), is married with two children, and resides in The Woodlands, Texas.