Before the holidays, I met up with Ana, one of my fellow Ironman Cozumel entrants. She was looking for a few tips on her stroke so I broke the underwater camera to see what I could find. First of all, as it is quite obvious, Ana is clearly a strong swimmer with a good stroke. From the surface looking down, it is hard to see anything that really needed correction. I did notice that she wasn’t getting much acceleration when pulled, which typically means the elbow is dropping. Once I hopped in and saw her stroke underwater I was able to pick up a few key issues.

Body Position: The first thing I noticed was the body position in the water. Her hips are riding a little low in the water, and this is the main reason her kick rate is so high. (See the pic below as well) She’s using her kick not for rotation or propulsion (see more on the kick here and here), but for lift. The kick is trying to keep here hips/legs high in the water. By adjusting her overall body position slightly she will save her legs from all the kicking and save gobs of energy in the process.

Pull: In watching her swim, I co 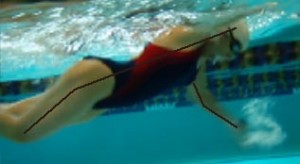 uld tell pretty quickly that Ana drops her elbow as she pulls. It can be a little difficult to pick up if you don’t know what your looking for, so I grabbed a still shot so that you can see what I am trying to point out. As I have mentioned before, dropping your elbow is very common in all levels of athletes, and especially so as you fatigue because you can maintain your cadence. The problem is that you’re reducing the efficiency of your pull dramatically as you do this. So once we adjust the body position, we can focus on maximizing the pull. (I go into the high elbow in much greater detail here, but in a nutshell, by leading your pull through the water with your elbow, you can drastically decrease the effectiveness of your stroke. We worked on the pull a good bit while we were there and I could see some great improvement by the end of the session. In fact, if you look at the two videos posted here you can see a difference in the second video (taken towards the end of the swim).

Kick: Now that the position is corrected, we can adjust the kick itself, because if we tried to do it first, her legs would just sink or she would revert back to her old ways so that she wouldn’t sink.

Ana has a 6 beat kick, meaning that for every stroke cycle she kicks 6 times, or 3 kicks for every pull. It takes her about 15 strokes to swim (which by the way is quite good) so that means she kicks 45 times for every 25 yards, or about 7,600 times in an Ironman swim. If she can convert her swim to a 2 beat kick (more about the 2 beat kick here), she could reduce her effort by 5,100 kicks in the Ironman. That energy would be much better spent on the bike and run. Improving her kick will also improve her body rotation, which will help her pull and body position.

For those learning to swim, or even for those who’ve been swimming for a while, this might seem like I’m beating up a a good stroke. Truth is, it is a good stroke (Don’t worry Ana!) but there are some key things holding her back from getting to the next level. And for the purists out there, yes there are some other things going on, like the pitch of her hand and her entry point, (causing some of those bubbles during her pull) for example, but these are minor and simple to correct once some of the other stuff is addressed.

Clear as mud right? Got questions? Let me have it.