Not long after I looked at Ana’s stroke, I jumped in and took a peek at how Sheri was swimming. As you might notice, there are some similarities between Ana’s and Sheri’s stroke. That’s not a huge surprise, because some of the issues I see tend to be common among most swimmers.

One of the first things that you notice is Sheri’s body position. You can see pretty quickly that her hips are riding a bit low in the water. Typically, this is a simple head position issue. You want to have your head lined up with the rest of your body, as opposed to having your head up, looking out in front of you. In this case though, Sheri does a pretty good job at keeping her head in the proper position. In fact, even when she turns to breathe she does a nice job at not lifting her head for air. Instead, Sheri’s poor body position is because of two different issues; she tends to swim with her chest rather high in the water and her kick is generating almost no lift. 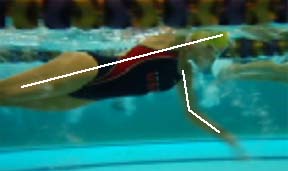 The solution to the first part is rather easy, the second is a bit more of a challenge. Sheri needs to lower her upper body down into the water by a few inches. It’s very simple to do but will often feel awkward because it takes a while to get comfortable swimming so low in the water.  One way to make the adjustment is to push off the wall in a streamlined position,  and with no kicking or pulling, adjust your body position so that you are flat or horizontal in the water. It may take a kick or two to keep your feet on the surface once you slow down from the push off the wall, but once you find that flat position in the water, you need to use it in your regular swimming.

The next piece of this puzzle is her kick. Sheri’s kick looks to be a 4 beat crossover kick. This means that she will kick twice for every arm stroke and  that at a certain point in her kick the left leg crosses under the right. Why the crossover? If you watch, you can see that she has good body rotation when she breathes to the left, but much flatter when she rotates to the right. A good kick is typically straight down and initiates the rotation to the other side. Because her kick is weak and rotation not as strong on this side, Sheri’s left, or bottom leg tries to compensate by kicking diagnally and across her body. Hence the cross over. 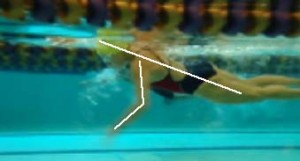 The main problem with Sheri’s kick is that it is almost entirely from the knees down. She is generating no power from her hips. As I have mentioned other times, you want to kick in freestyle like you kick a ball. The hips start the kicking motion and you finish through the knee and ankle. Sheri’s hips and knees aren’t coordinating with each other, so any force that she is creating is coming from her knees and ankles.

Fixing this can be a bit more of a challenge, because the kick creates a rhythm and a timing for the whole stroke, and so changing this bad habit often feels like you are overhauling your entire stroke. I would recommend that she dedicate some serious pool time this winter to kicking, both with and without fins, and really focus on kicking a ball everytime.

The final piece of Sheri’s stroke that I want to address is a common one. Dropping her elbow. As Sheri’s arm begins the pull, you can see that it’s her elbow, not her hand or forearm that is the leading edge through the water. In fact, her forearm doesn’t get vertical until her pull is at her hips. I go into greater detail about this problem here, but in a nutshell she needs pull with her hand and forearm and not her elbow. A good drill to do to work on this is swimming with a closed fist. By removing the surface area of your hand you are forced to use your wrist and forearm to move you through the water. By doing this and focusing on where your elbow should be in relation to your forearm, you can correct the problem. Doing the pull correctly usually results in that AH HA! moment as you generate considerable more power from each stroke immediately.

Fixing bad habits in the water can be a bit frustrating, but if Sheri spends the time now making these adjustments, she will be coming out of the water faster and have used less energy. I’m sure this will be a motivator, because I know Sheri would love nothing more than to get the heck out of the water and onto something else, like the bike and the run.