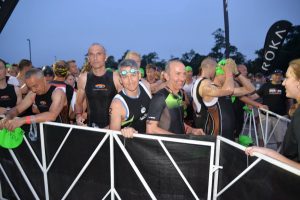 As is now tradition in this sport, I give you my race report for the 2016 edition of Ironman Texas. Decades ago I wrote these in a composition book for the purpose of logging details of the race, to help me remember just what I ate or how hard I raced in a particular spot, so as to learn. It’s since morphed into the story of the day. Mostly boring if you’re into the sport, Entirely boring if you’re not. Either way, I write them now, and for the 3 (OK.. 2) of you who will read this, thanks.

This was Ironman start number 10 for me and eventual finish number 9. I still get just as wound up with nerves as all the previous attempts, but have learned to refine things over time so that it feels a little cleaner in my head.

Speaking of cleaner, with the swim start and finish in the same spot this year, it bought me 20 minutes in my morning where I didn’t have to walk all the way from T1. So I got an extra 20 minutes to not sleep and stare at the ceiling last night. Winning!

As the pros got in the lake and warmed up, I made my way over to the corral and as close the the front as possible. During the nervous chatter I heard quite a few people mention where they swam Division 1 in college. Combine that with all the swedish goggles I saw, and I knew it was gonna be a quick swim.

This was my first rolling start, and I have to say, I’m not a fan. In a mass start, while there is jockeying for position, there is also the ability to spread out. No so with the corral. As we lined up at the timing mats in the last 60 seconds to start, I went from the second row to about the 5th row as people crowded around the sides and filled in front. This wouldn’t have been an issue if these people belonged up front, but like every race, someone always thinks it’s a good idea to seed themselves faster than they should. And, as it would play out, this would be a teaching moment for some of them.

The gun goes off and immediately I get caught up in a churn of slower swimmers. So I did what faster swimmers do. Swam right the hell over top of about 10 people. It didn’t take too much fighting to get clear, but as I did, I noticed right away that I had been gapped. Shit. The distance wasn’t too awful much, about 10-15 yards, but that meant that I was going to have to go faster than the fastest people in the water to bridge the gap. I thought about it, then scrapped the idea. It’s a long day. blowing out a big effort in the first 5 minutes didn’t seem to be an overly smart idea. So I held my pace, and as it turned out held the same distance between myself and this group of 5 in front of me. Part of that is because our paces were similar and part of it was because whoever was pulled that group wasn’t swimming especially straight. So straight and slower = Faster and drunk. At least for a while.

Once we made the far turn, the gap started growing slowly. I could still see the lead SUP paddler clearly, but he was getting smaller. It was at this time that I was also catching a handful of pro women. Made the final turn towards the finish. Swim wasn’t that good, but it was good enough. Time: 52:33

Transition went well, but when you only have a helmet and shades in your T1 bag, there’s not much to get confused on. Passed a few of the faster swimmers napping in the tent. In the days leading up to the race, a decision was made to move the swim finish and T1 to same spot as the swim start. We can debate the various pro’s and con’s of this ad nausaum like type A’s like to do, but a definite perk was the crowd. It was considerably larger than the usual swim finish. Which in turn makes it extra fun to run through. So thank you to the super yell-y crowds. But I digress… 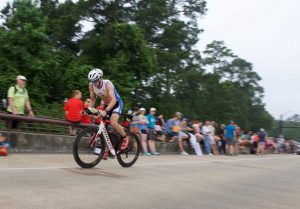 Bike – I know there was lots-o-complaints about this bike course, but when I drove it, it reminded me of racing in the 80’s and 90’s. Lots of little known streets that were easy to permit, and a healthy dose of turns. I liked it. It really made the ride go by quick. Anyway, I hopped on the bike 4th overall, around a minute or so back. I had ridden more than I had in years past to prepare, but it’s still my weakness. Knowing the heat that was going to come on the run, I decided to ride this a little easier than normal (and I usually keep the ride easy to begin with) Once the heart rate settled, it was a good bit lower than previous races. For most of the ride it felt little more than warm up effort, which was great. For the last 9 months I’ve been fighting a piriformus issue, which has been manageable but still a royal pain in the ass (see what I did there?). About 80 minutes in I could feel the pain of a dull cramp coming on from the hip, which further restricted the effort. Other than that, the ride was mostly uneventful. The drafting of some was a little ridiculous, I even ended up yelling at some people who were so blatant. Marshall’s were able to pop a number of them, but 90 min later I would see the same people in the same tight bunches rolling through again. There’s got to be a better way to police that. Finished the ride like I rode it fairly easy… which I would go on to regret. Time: 4:16

Hit a very hot and humid transition, changed my kicks, took down a can of chicken noodle soup (yes, you read that right. 960 mg of already dissolved sodium. Pure stomach settling goodness.) and headed out. 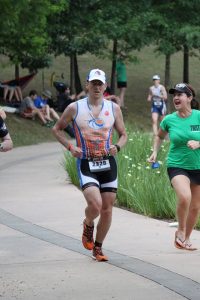 Legs felt nice and fresh starting the run. Part of this is from the easy ride, but most of this is from the MUCH higher volume of running in preparation for this. (All workouts are public by the way here, and all GPS recorded workouts are on Strava if you are curious). Pace out the gate was 7:15. Average pace at mile 7 was 7:35, and felt very comfortable, and the heart rate agreed. For the first two laps, the only thing I was really fighting hard was the heat. It was oppressive. My wife sewed some mesh pockets on the breast of my kit to hold ice, and it worked perfectly. A cup of ice on each side and some in the hat and I was good to go for a while. As the race wore on though, that trick would only keep me cool for about a half mile, so I knew I was fading.

Mid way through the second lap, a guy runs up behind me and says, “You have a great tempo for a guy your size. For as big as you are, just focus on that cadence in this heat”. Huh. How about that? My high school friends ask me if I have an eating disorder as I get close to race day, and this guy is calling me the fat kid. Good luck to that guy’s wife.  At the end of lap 2 my quads starting giving out, and on lap 3 each time I landed the pain grew more and more painful. I held the running together until mile 24, then I talked myself into walking 10 steps to relieve the pain. We all know what happens when that seal is broken…yep, last two miles were a walk run combo. Another decision I regret. At mile 25 I saw some dark clouds starting to move in and cover the sun, which was a minor relief and an immediate pick me up.Run: 3:40

Ran through the chute happy with my day and as the first Woodlands finisher I got a little extra crowd love thanks to announcer Mike Reilly. The goal, as always, was Kona, and as it turned out, I would miss that mark but 8 minutes. That’s 5 seconds per mile on the bike that I soft pedaled. I realize that at some point you start trading time (faster bike = slower run), but I left some low hanging fruit out there. Such as life I guess. Either way I’m happy with my day. Add back in even some easy pedaling for the missed bike mileage and it would have put me in the 9:40’s for an accurate distance Ironman in 90+ degree heat. I’ll take it.

I didn’t take long though for that heat to change. After I made it through all my post race checkpoints (medal, timing chip, photos, walk towards food/medical, etc. Those dark clouds turned ugly. On my second take through the food section I was handed a ton of food and told to clear out. They were vacating the tents due to lighting. Didn’t take but a few more minutes until the clouds opened with rain, hail, lightning, and a 20 degree temperature change. We fought our way down to Hippy Hollow where I ate, warmed up, and cheered on friends still out there.