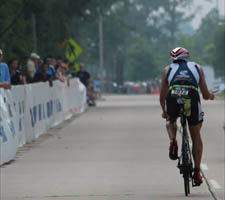 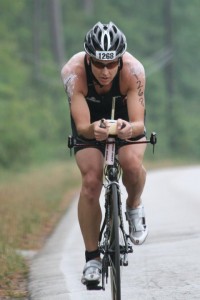 As mentioned in the last post, I am taking a step by step approach as I see Ironman Texas. I broke down the swim here. Now it’s time to ride.

The bike course has changed slightly from 2011 to 2012, but the meat and potatoes are the same. I’ll go through the 2012 final course and come back and adjust this if there are any last minute changes. I’ve seen some good write-ups online about this course and even watched a few videos of people driving the course. My thoughts may be slightly different though, as I have been riding these roads since the early 90’s. So without knowing it, I’ve been training on this course for 20 years. Like the swim, I will start with the athlete and end with the spectator.

The ride starts at Town Green Park, then off to your right for a super quick tour of Town Center. You will quickly find yourself on Woodlands Parkway where you will be heading west for about 10 miles to get out of The Woodlands. You’ll be on smooth concrete and for most, the adrenaline will be running high, so there’s a good chance you’ll barely remember this section. For those with their wits about them though, it will seem like an ever so slight ride uphill. You’ll turn right and head north into the business end of the course. The roads as you leave The Woodlands are very smooth asphalt and they essentially stay that way all the way to Grimes County, or 2 miles before Richards. So for you tire selection/rolling resistance geeks, a high pressure tire will work just fine, as there are only a few short sections of rougher road.

If history is any guide, you have about a 95% chance that the wind will be coming out of the south, so depending on how fast you get out of the water, you will have either a very slight (faster swimmer) to light (slower swimmer) tailwind as you head north, as the wind will pick up as the sun rises. If you’ve looked at the elevation maps, you’ll also notice that you gain elevation on your way out to Richards. It’s slight though, as most will find this a very flat course.

The first thing resembling a hill will be the overpass as you make the turn from Fishcreek to FM2854. As with most overpasses with concrete walls, there’s no place for debris to escape, so move to the road and off the shoulder as you climb so as to avoid a flat. 2854 will start to show a little more movement with elevation, but only enough to sit up climbing, not enough for the small chain ring.

2854 will turn into the Lonestar Parkway as you crossover 105, but be careful at this intersection, you will be coming downhill at a pretty good speed and the asphalt road you’re on will intersect with a concrete 105, which means there are some seams and cracks that could cause big problems if you hit them wrong. Most of them have been filled, but it’s still worth keeping your eyes open. This is also a hotly contested intersection among the locals, so be mindful of impatient cars ignoring directions.

Once North of 105 you will start into the rolling hills on FM149. The climbs are longer and more gradual than the descents are (if you ever ride this section the opposite direction you will know what I mean.) What does that mean? Seated climbs will usually be more effective and it will be very hard to use the downhill momentum to get you over the next hill, like on some courses.

As you climb through the forest you will make a right onto Osborne Road. This is a 1.5 lane road, so it’s exceptionally narrow if you find yourself with oncoming traffic. The first half mile has some MAJOR cracks along the road. Don’t get your wheel caught in one or you’re done for the day. Spend 60 seconds out of your aerobars and play it safe.

You’ll make your way back to 149 for a few more miles and then take another right for the Bays Chapel section. Like Osborne, this has a few sections of road that you need to look out for, but most of this section is smooth. (The uphill grades you encounter are actually pretty nice compared to the bigger hills you avoid had you stayed on 149.) Once back on 149, you will quickly see the sign notifying you that you are entering Grimes county. Grimes county is where you’ll encounter all the chip n seal roads for the day. Don’t fret too much though. If you ride on the area where the car tires have worn the road down, you’ll find that the road is very smooth until you get to about 2.5 miles west of Richards. It’s at this point that the suffering will begin for most. You’re almost halfway, the shady forest has been replaced by the open pasture, the roads begin to get rough, and the wind has started to pick up.

Once on the rougher part of the chip seal, you’ll continue on 149 for a couple more miles before you take a left onto FM2562. In my not so humble opinion, this is by far the worst section of the bike. Maybe even the race. It’s rough, uphill, into the wind and there is no place to hide. On the upside though, it’s on this road that your special needs bag will be waiting for you.

Once off that god forsaken road, you’ll make your way back east and then south out of Grimes county and the chip seal roads. Other than the wind, it’s pretty uneventful except for one little nasty uphill a few miles before the county line. For most it will be a small chainring type hill. Might be worth getting out of the saddle too. Not to worry too much though, it’s short and sweet.

When you hit the county line YOU WILL KNOW IT. It’s like one big sigh of relief to hit the smooth asphalt again. Ahhhhhhh. From here, it’s about 8 miles til you cross over 105 again. It’s a net downhill ride to 105, but won’t feel like it as you will be riding into the wind and the uphills are much more abrupt than the downhills.

At this point you’re about 34 miles from home, and like any Ironman, this will be the the toughest stretch. Sun is high, the headwind has picked up, and you’re getting tired and cranky. This is also the time you will start to see those who rode like a bat out of hell on the way out and now they are paying the price. Don’t be that guy.

A little side note about the wind. In the Spring in this area the South winds can get absurd. The warm air from the gulf will push back on the cool air from the North. It’s the balancing of pressure and temperature gradients. Blah blah blah. Anyway, if you trained on this course leading up to the race you experienced it firsthand. They can be as bad as Kona. But the heat of summer kills the hot air/cold air conflict and those strong south winds die down. What does that mean? If race day is hot, expect much calmer winds. If race day is cooler, hold onto your hat…literally.

From this point on, the ride is relatively uneventful. A left here, a right there. You’re either on smooth asphalt or smooth pavement. Once you get back into The Woodlands though, keep in mind that you still have about 12 miles to go. It’s a little deceiving as you are ready to get the heck off the bike, but you still have 45 minutes or so left in the saddle.

In the final miles, to appease the traffic and add one more ache to your day, they added the stretch of Flintridge to get you home. While still flat by comparison to other races, this is the hilliest road in The Woodlands. So prepare yourself for about 4 more little grinds up a hill. Once this is over though, it’s truly time to get ready to run. Time to sit up and start stretching your legs and back for what’s ahead.

This one’s a toughy. With a one loop course and some big traffic back ups on the major arteries (1488 & 105), you have 2 easy options. #1 head North on I-45 to either 1097 or 1375 (New Waverly). That will get you to the North end of the course where you can see athletes up in and around the National Forest. #2. Head west on Research Forest Drive to 2978 and watch the athletes exit or enter The Woodlands. I think the best option though is #3. Stay at transition to watch em leave, then go shopping or get a bite to eat. You don’t want to get stuck out there with such a spectator friendly run.

Up Next: The Run.