Swimming at the Front: Tactics for Racing in the Craziness

Previously I have talked about having the most pleasant open water experience you can by avoiding the problems that pop up in an open water swim. Those tips can come in handy if you are not overly confident or accomplished in swimming. What if you are a good swimmer though? If you plan on racing the swim and getting out in the front of the pack you will need to be a bit more aggressive in your approach. So for those who aren’t that concerned with potentially mixing it up with others, here are some front of pack suggestions. 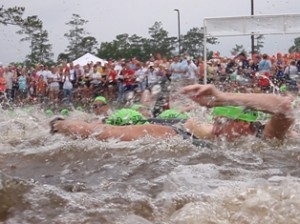 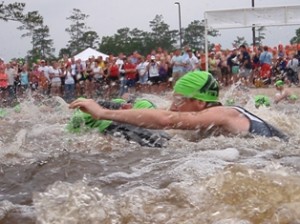 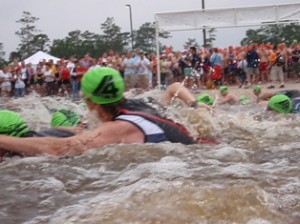 The Start. Even though you are lining up in the front row(s) at the start, the goal of avoiding getting tangled up still applies. If you get caught up fighting for space with others, you will at best lose time, and potentially lose a tooth.  I have been the first out of the water at countless races and will tell you that I have only lined up on the inside line a handful of times. The reason is that it just doesn’t pay. The field is just too tight in that area. A good place to shoot for is 20% over from the inside (The start is 100 feet wide, so you look for a spot 20 feet from the inside line). This way you’re to the outside of the fighting, but still close enough to latch on and draft off of a faster swimmer as the pack thins out. The 20% rule doesn’t always work, so be flexible. The last time I was in Kona for the Ironman World Championships, I used my 20% rule and ended up physically fighting (no lie) for space with 5 minutes to go before the start! Apparently others use my rule too. I moved over another 5% and had plenty of clear water.

Once you find your spot, you need to protect it before the race starts. Easiest way is to move from treading water vertically to treading water on your stomach. Extend your legs behind you and scull your arms way out to your sides. Throw in some stretching or some violent arms swings to “warm up” and you should have a nice little bubble of water to swim in when the gun goes off.

Fighting. Once the race begins it’s imperative that you start fast with a very large kick. Nothing will stop you faster than someone swimming up on your legs. A big kick will more than likely t redirect the person behind you, as they don’t want to get kicked in the face. Inevitably though you will find yourself getting tangled up if you do this sport long enough.  Remember that clear water is always the goal. Don’t forget this, especially as revenge and curse words start to creep in. First, lose the ego in the first 100 yards. If you are getting pushed a bit to the left, then go left. This is not the time for “This is my turf” attitudes. If you get squeezed on both sides then you need to prove that you belong on the front row. Up the effort to a sprint and be sure that your arms and legs are landing above theirs. As I mentioned before, nothing will slow someone down faster than if their arms and legs are being overtaken, or hindered by something. The sprint may seem long but these tangles clear themselves in a matter of 5-10 seconds. By keeping your arms and legs above theirs and adding a short sprint, you should come out ahead.  So what if you don’t win the supremacy battle? Once someone swims up to your butt from behind or comes across your spine from the side, then you need to conceed. I found the fastest way is to drop a foot or so below the water and let them swim by. This is counter intuitive however, because most people are fighting for air above all else. By dropping down you can quickly survey the surface to find some clear water. Again, this shouldn’t take more than 5 seconds, which is considerably faster than if you keep your ego and battle it out for the next 100 yards. 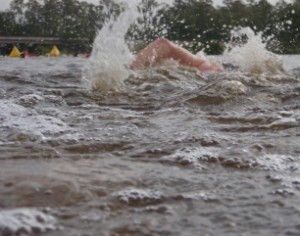 Shaking the Drafters. Ok, you you have broken free of all the fighting and settled in to a nice rhythm at or towards the front.  Problem is that this is a race and there are 3 people catching a free ride on your heels, one of which is a strong cyclist that you need some time on. Getting someone out of your draft is easier in the water than on the bike, but still no piece of cake.  The key is confusion and frustration.  Try and get a look at which side they are breathing to. Then, start with a short, bubbly kick so that they can confirm they are right in place. Next, kill the kick and take 3 hard strokes away from them opposite their breathing side. This should get you 4-5 feet over, and them squarely out of your draft. Then you need to put in a good 20-30 second surge.  Ideally, by the time they realize that you are not in front of them anymore, you have gapped them enough to break free. Sometimes you will need to repeat a couple of times to shake them.

Passing the Previous Waves. As the swim wears on you will end up catching the waves that started before you. Passing slower swimmers can slow your time more than anything else if done wrong.  I have found that swinging a little to the outside of the people gives me a little more freedom than trying to pass on the inside, right up against the buoys. I know that I have added a little distance, but like I’ve said, clear water is the goal, and swimming the shortest distance has to take a back seat. Best advice here though is to try and look for the trends. Everyone is out there following the swimmers in front, so if a group gets a little off course, there is a good chance that the long chain of followers will drift off course as well.

The rest of the swim I’ve covered before. Watch the currents, use the surf to your advantage,  swim to the shallows at the finish, etc. Good Luck and remember the most important rule in the water… If you run into me out there you are not allowed to pass.