The Importance of a Good Base

Every winter, we all go into our ‘base’ training mode, but based on my experience over the years, very few people actually understand the purpose and specifics of base training. For most, base training is simply unstructured workouts and more often than not, a reason to take it nice and easy when you don’t feel like hitting it hard. Interval workouts are still done and the aggressive groups rides are still a regular part of the weekly equation. Ask someone about their base training and you will get some vague answer about focusing on aerobic activity or low intensity and decreasing the hard efforts. 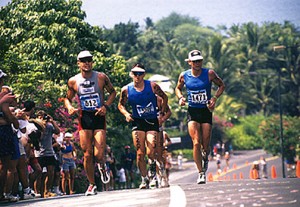 I see the base phase of training much different. I think base building is the most important phase for endurance athletes. It is a very focused training period in which you train almost 100% of the time in a very narrow window of aerobic effort. This window doesn’t include easy aerobic training nor does it include anything at anaerobic threshold or above. Basically (outside of warm up and warm down) you keep your effort right at or just below your aerobic threshold(AT). For those who use a heart rate monitor this means constantly keeping your heart rate in a range of 10 bpm where your upper ceiling is your aerobic threshold and you never get to your anaerobic (or lactate) threshold . So lets say your AT is 155bpm, then you want to train between 145-155 for your entire workout. Note: this doesn’t mean that this is your average for the workout, this means that if your heart rate hits 156, you slow down. Likewise, if you heart rate drops to 144 you must pick it up. For those who train without a heart rate monitor, this is roughly your Ironman race pace.

Now some (especially those who love interval training) will disagree, as they don’t want to forego the winter track workouts or swallow their pride and get dropped on rides. Science can probably prove either side of the argument as well, so I usually look to who applies any principal and their results.  If you look at the training of endurance athletes, it’s pretty easy to see that the majority of those who are successful implement a targeted base building phase. Take Mark Allen, the winningest triathlete of all time, who began his career running a mile aerobically at over 7min per mile. Toward the peak of his career he could run a mile at 5:25 without ever going anaerobic. Mike Pigg, another one our sports all time greats, once stayed in his base phase of training until September because of the improvements he was making. Legendary running coach Arthur Lydiard preaches the same, stating that one should train between 70% and 100% of your maximum aerobic effort during this time. Even Chris Carmichael, who coaches Lance Armstrong, talks at great length of the benefits of training just below your lactate threshold to build your aerobic foundation.

Here are just some of the benefits you’ll see by training more specifically during the base phase.

Aerobic economy – 99.9% of our racing is done aerobically which is almost 20 times more efficient at producing energy than anaerobic exercise. Chris Carmichael has said, “Endurance cycling” means any event lasting longer than one minute. Even the kilometer time trial on the track is an endurance event because, although much of the early power is produced anaerobically, the event is won or lost in the last eight seconds as competitors with the best aerobic system slow down less.” Just as the best way to be a better sprinter is to sprint, the best way to improve your aerobic economy/ability is to train aerobically. We as endurance athletes need to increase aerobically produced power. This means burning more fat for our calories and not accumulating lactic acid. The more you train aerobically the greater the recruitment of slowtwitch muscles, the better they become at using fat as a fuel source, the faster you get at the same effort level and the more efficient you become at burning fat for your caloric needs.

Stress acclimation – This applies slightly more to the age-grouper and newer athlete than a seasoned vet, but the base phase is the time to slowly increase the volume and therefore stress levels on the body so that it can adapt and later be able to do high intensity with out becoming overstressed (i.e. injury and or overtraining). Bloodflow really determines the rate of how fast different body parts adapt. Your heart and lungs receive a great deal of blood so the adaptation to stress is relatively quick. Muscles adapt a little slower but still adapt in a timely manner. The limiters are the tendons and ligaments. They receive very little blood flow, so when they are stressed, it can take a while for them to adapt. I that they’re also the most important to get built up for the season because when you overdo it and tendons or ligaments get injured, it takes forever for them to heal. So a long and consistent base phase to build up the tendons/ligaments is important in order to have an injury free season.

Muscle memory – This applies to all sports but more specifically to swimming. Repetition helps the nervous system “remember” specific movements so that those movements require little thought to repeat over time. The base phase offers a time to hone in technique and break bad habits. If you are always adding intensity in your workouts then your body will revert back to previous habits ,or “memories” in order to accomplish a performance goal that you have set for the day. If you remove the high intensity you are able to focus exclusively on the desired technique until it becomes the default habit. This is why stroke drills are never done at a high intensity. Once the season kicks in, you should be able to apply the new and better technique to the high intensity workouts without reverting back when you get fatigued.

Not everyone will agree, but like I stated in the beginning, I look at how the best of the best train, and what themes are recurring among that group. The other side to this coin is enjoyment though. The base phase can be very boring, so if some speed work keeps you interested and motivated, then go out and do it. The need to enjoy the journey can far outweigh the need to follow a strict schedule if you end up losing interest in the sport.