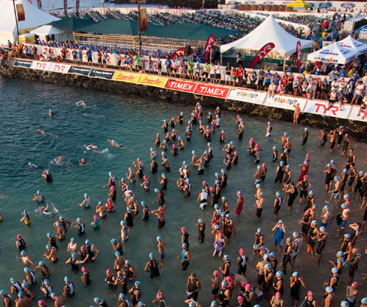 The Magical Taper and The Benefit of Overtraining

We all hear the term “taper” over and over in our competitive circles. Ever wonder why it works better with some than others? Taper of course refers to the ‘tapering’ off of a particular aspect of your training. For some it’s training volume and others it’s intensity. A lot of the time it’s both. But the rest is just part of the story.

If you just started a running program Monday, backed off on Thursday, will you perform great on Saturday? of course not. you’re missing the key ingredient. Load. Also commonly called WORK. In order to increase performance significantly from a taper, there must be a stress load that your body can recover from and build stronger off of. That means that it can’t be the same old stuff. You have to have an increased level of stress prior to your taper, but not so much that you can’t fully recover and build back stronger during that taper. And that’s why taper can be so tricky. Push too hard or rest too little and your body won’t bounce back. Push too little or rest too much and your performance starts slipping. It’s a risky endeavor.

I came across this article from Alex Hutchinson of Sweat Science that references this great little study on taper. Actually, the study is focusing more on the power of overtraining (or “overreaching”, the positive, hot friend of overtraining) and the heart rate indicators for it. But by proving the case for the first half (stress) they make an excellent example for the second (taper).

To summarize for those of you who didn’t click on the link and want me to spoon feed it to you, they took two groups of well trained people, one group (the control) training at regular levels and recovering from each workout, and another that trained at increased levels  to overreach as to what their body could handle. By watching key heart rate indicators over a span of 4 weeks, they saw that the first group kept relatively stable stress levels (and therefore HR indicators) throughout the test, while the second group (as expected) showed growing levels of fatigue as the weeks progressed. Then during the taper, the overtrained group bounced back and recovered  and promptly blew the doors off of the control group in the performance test.

Now the taper is as old as dirt. People rest up before events intuitively. But the art of the taper is tricky. As a swimmer growing up, there was a sequence to the whole thing. Prior to taper the intensity would ramp up and volume would drop some. Very intense workouts (let’s call them zone 6 for your endurance folks) would then taper off into progressively shorter and easier workouts until the big meet. The shorter the distance you raced, the bigger your taper. So those racing the 50 freestyle would taper a week or more longer than those swimming the 1500. The reason being that slowtwitch fiber (endurance muscle) recovers considerably faster than fasttwitch (sprint) fiber.

Come day 1 of the meet we were ripping our skin off we were so energized.

Since triathletes don’t race for just 45 seconds, the whole process looks a bit different. A proper load will have you getting more and more fatigued as you go. Fully recovering from one day to the next just won’t happen. I say proper load because there are a number of coaches and athletes who just can’t get their head around training tired. They fear the fat ugly version of overtraining will show up and they will fall into the abyss of fatigue. So the coaches proclaim that training without being fully recovered is dangerous or harmful and the athletes skip workouts claiming gluttonous amounts of fatigue. For the purposes of this article, we’ll call them the control group.

The others continue to train beyond their body’s ability to keep up. Heart rate is slow to climb up the prescribed zone, motivation starts to wane, getting out of bed in the morning becomes more of challenge. All this because (depending on the race) the volume or the intensity of their training is reaching new highs (even if that performance ain’t so great in the latter weeks).

Then comes time for the rest. Too late to make any changes. Hay is in the barn. The taper has begun. If you are shooting for the shorter stuff, the intensity should drop while the volume initially stays level. If you’re a long course guy, the volume drops while the intensity stays for a while. It’s 1 part science, 1 part paying close attention, and 1 part basil (ok, not really).

I wish the whole “rest” thing was linear (back off a little more, feel a little better), but it’s not. Your body just took a beating, and just like the soreness you feel 2 days after a car wreck or a hard weight session, there’s a good chance that things will get worse before they get better. Your body has to heal. And just like all those great life quotes and metaphors along the lines of  “what doesn’t kill you will make you stronger”, when your body gets a beat down, it builds back the areas of injury stronger. Also known as adaptation. (Life quotes wouldn’t be nearly as cool though if we said “what doesn’t kill us causes adaptation”.) So there’s a real good chance that you will go through a phase in which you will feel horrible. Then comes the sunrise. Energy levels grow, every thing seems just a touch easier, and your motivation comes back with a vengeance. The taper was executed successfully.

And what of our control group? The group of coaches that insist on full recovery and the athletes that skip workouts every time they feel tired? Well, as the study showed, their performance stayed about the same, and depending on the severity of the taper, got worse as they lost fitness by resting too much. Ever wonder why that guy you train with can never seem to pop a race the way you think he should? This would be one of many examples why.

Like I said before, the taper itself can seem a bit tricky, but you have to make sure it’s paired with a healthy dose of work.  Put the two together and you are setting yourself up for a great performance.