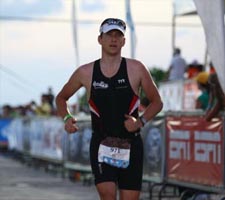 Why I Train and Coach the Way I Do

I’m often asked about why I train the way I train or why I coach the way I do. The easy answer is experience. I’ve been lucky enough to learn from some of the best coaches around. So unlike a large portion of the coaches and athletes out there today who just point to a training certification or a Joel Friel book, I’ve learned from the best both via their teachings and their application to my training. (Oh, and I went off and got certified too. That actually had almost no effect on my philosophy unfortunately.). So where did I learn the stuff I learned? Here goes….

My coaching influences have be many. My swim coach through my high school years was Hall of Fame coach John Vogel. He was a great motivator and exposed us to work ethic and discipline. He had a knack for creating a team environment in which the athletes trained and performed more effectively as a group. Similarly, my running coach in junior high and high school was legendary coach Dan Green who won 15 state titles in cross country and now coaches for Adidas. Dan, like John, taught people how to train and molded work ethic through classic running principles.

In college I was coached by Bruce Marchionda and Brad Flood, both coaches of Olympians. There I learned a lot more of the science behind the training. Blood lactate tests poolside, training zones, highly specific periodization was all part of the process.
As lame as it sounds, I use to skip classes to go to the library and read exercise science journals to learn more of the specifics to training and performance than my biological science degree was giving me. College was also where I began to communicate with triathlon legend Mark Allen’s coach, Dr. Phil Maffetone. Phil had what people thought was a different approach to training (the reality was it wasn’t ground breaking, just a different take on a tried and true method) with a heart rate monitor. I had lots of questions, and surprisingly, he responded and answered them all. Working with Phil turned out to be a bit eye opening. Like most people, it was a bit of a mental struggle to focus in on an intensity less than all out, especially coming from a swim background where races lasted about 2 minutes. It actually provided great clarity as to the cause and effect of things I was doing. One thing was clear though. His method worked.

Jump ahead to my pro career. While living in Colorado Springs I got the privilege to train along side people like Olympian Nick Radkewich, Ironman champions Tim and Tony Deboom, Olympian Hunter Kemper, Olympian Laura Bennett, Becky Lavelle, Olympic medalist Susan Williams, and many others under the guidance of National Teams Coach Dr. George Dallam. Even spent some time racing Olympic swimmers Amy Van Dyken and BJ Bedford when at the pool. George taught me volumes about mechanics and form. I also learned what to do and what not to do to succeed at the very highest level in sport.

It was there in Colorado that I ran into Eddie Reese, who many (including myself) think of as one of the greatest swim coaches in the history of the sport, and head coach of the University of Texas Men’s team. He had an amazing ability to spot greatness outside of the pool. There are countless stories of Eddie picking people out of a crowd and making them Olympians. Eddie knew who I was from my swimming days and extended me an invitation. He told me, “TJ, if you are ever in Austin and need a place to train, you can always train with us”. Little did he know that 4 months later when I showed up on his pool deck, I would take him up on it. True to his word, he didn’t waiver on the offer, but instead simply said, “why don’t you jump in lane 3 for warm up”. Surrounded by almost a dozen more Olympians, I learned volumes more from the great Eddie Reese.
All of these people have provided great insight in different areas. Some discipline, some science, some motivation, and some things to nurture the intangibles. Collectively, it was one heck of an education. I just wish I would have taken more notes.

Funny thing about all of them though, was that they were surprisingly similar in their approach. Training theories show up almost as often as fad diets, but most of this stuff nests in the newer athletes and inexperienced coaches. As you rise through the ranks though, you find that the truly successful coaches and athletes have a fairly similar outlook.

Some people ask me if I coach this philosophy or that. The truth is that I don’t follow one specific method. It’s a blend of all my experiences. Some people need more motivation than science, so you sneak the science in the back door. Some people train like robots but have trouble getting excitable for the big race. So you approach it from another angle. Everyone is different, and you need to play on the strengths and minimize the weaknesses. In fact, I’d be wary of a coach who does everything “by the book”. It’s an early sign of lack of experience.

Have my methods been successful? I’d like to think so. While it’s not a full time gig for me, I have gotten first timers through their big day, turned amateurs into pros, and qualified athletes to Kona a few times. I’ve spent the last handful of years coaching the coaches, and, in an effort to keep from hurting feelings, I’ve trained a number of athletes in secret. Been doing it since about 2007. So there are a number of coaches right now who are building up their resume’s on athlete’s that they are not even coaching. I don’t mind though. As Ronald Reagan put it, “There is no limit to the amount of good you can do if you don’t care who gets the credit.”