Sometimes Bike Fit and Aerodynamics Are Not the Same Thing

In the past year, I’ve had the privilege of riding 4 different bikes. In the process of switching from bike to bike, the nuances of a good fit have come up. It’s also been a regular topic of conversation at the rides, races, and well.. happy hours that I’ve been at. So I thought I would lay out my not so humble opinion on the subject.

It seems that many of those out there confuse “As aero looking as possible” with “good fit”. While these two can get along at times, sometimes “aero” doesn’t always mean “fit”.

While in the fit studio, the aero position just looks so damn cool. We look freakin fast, and because of that, subconsciously it feels good. And that feel and excitement bleeds right on over to that power meter they have you on. So you get excited, feel cool, and you generate a few more watts in that position. Bang! your dialed in. Perfect fit. Not so fast my friend.

What feels great on a 5 minute effort can change a bit when the rubber meets the road. Some people I ride with and others I coach have had trouble staying in the aerobars for more than 15-20 minutes at a time. Others after an hour. They have to sit up for a while before they can get aero again, thereby ruining any benefit that the extreme position offered, and then some. Others do what is sometimes referred to as  self fitting. This basically means that the rider scoots the hands back on the aerobars to increase the stack (height of the bars), scoots forward on the seat to make the bend in the hips more shallow, points the toes to increase the lever of the leg, or other things like shrugging the shoulders to raise the back. Basically moving around to make yourself more comfortable and undo that formerly perfect fit. Any of that sounding familiar? Fact is that a good fit is more of a biology question than it is an engineering one. What’s your range of motion? What muscles generate the most work for you? Are you comfortable or do you have to fidget to stay in that position? If you race long, can you eat and drink without discomfort in that position? The questions go on.

So in the vein of that, let’s take a look at 3 of the best cyclists in our sport. While we could go back and forth all day on various cyclists and their respective fits, I picked these to make my point.

First off would have to be Lance Armstrong. Known as one of the greatest cyclists in history, Lance decided to come back to the sport he left in the early 90’s. If anyone has a vested interest in a good fit and being aerodynamic, it’s this guy. He’s personally spent gobs of time in the wind tunnel, made countless adjustments, and made millions and millions sitting on a saddle. So why isn’t he in an extreme position? Because he found it wasn’t so important to be that low. In fact, in an interview with Slowtwitch here, his fit advisor Steve Hed said, ” if you go to the tunnel first, and then you get out on the road and find you can’t maintain the position developed in the tunnel, you’ve wasted your time in the tunnel”. He went on to mention that lower didn’t translate to better aerodynamics. The guy who aerodynamics mean more to than any other person on the planet says you got to be able to comfortable hold your position.

Now take a look at Chris MacCormack, or Macca. He won his second Ironman World Championships by laying down the gauntlet on the bike and out riding all of his run competition. And along the same lines, Macca doesn’t go aggressive with his bike position either.

In an interview with Competitor found here, he said that he  “prefers a laid-back position because he says he has a “big arse” and sitting rearward helps him utilize his glutes.” Macca knows where his power comes from, so setting himself up in an aggressive position which limits the use of his “arse” is useless. 12 seconds saved for being aero, 4 minutes lost because his big muscles can no longer be used effectively.

Finally let’s look at Chris Lieto. The guy has been THE biker in our sport for the last few years. Always causing trouble in Kona, and often starting the run with a huge lead. Those pictures we’ve seen on TV have been the poster child for a flat back and super aero position. The guy looked like a bullet. But in his last race he was photoed with a new set up, and this one isn’t so extreme. 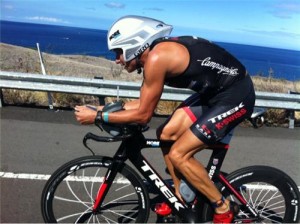 So why don’t the super stars follow those rock solid facts that we read on the internet? A number of reasons. Here are just a few:

Steep angles can cut off range of motion for some of your most powerful muscles like your glutes (or your ass for those who missed anatomy class).

Short cranks decrease range of motion in your legs. Fewer muscles are forced to do the all the work.

A low/extreme position can create problems with digestion as the stomach/intestines are squeezed while they try and to their job.

An extreme position is uncomfortable to maintain for extended periods. Not as big of an issue in a short race, but every time you sit up, you negate all that benefit of that position you just picked up in terms of drag. That’s why less aggressive set ups tend to be more aero in long races like Ironman.

Now, all this is not to say that you need to scrap your position for something that is more laid back. There’s a lot of people out there who are comfortable and speedy in that position. My point, rather, was to explain that not everyone needs to be pushed in the same direction. And along those lines, remember that a fit is not absolute. Go in with an open mind, and make sure your fitter has an open mind too. But if things aren’t working after a while, change them. A couple of allen wrenches on your next ride might be a good idea. The more you understand how your body works on that bike of yours, that faster you will be.