Figuring It All Out 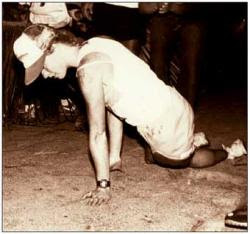 Many of my friends, training partners, and people I coach are recovering right now from Ironman Texas. Some had an amazing day, some just ok, and some had a disaster of a race. All of them, however, discovered problems with their game plan along the way. This is where some are going to get better at this whole thing, and some will get stuck in an infinite loop of frustration. This is targeted at the former of the two.

The first thing you need to do is sit down and write down every detail you can remember about the race. The sooner the better. Write down everything, from the obvious like heart rate and times to the little stuff little food cravings, bathroom breaks and sunburn levels. Some of it will mean absolutely nothing, but some of it can show itself as a clue to improvement 6 months from now.

Now focus in on the problems. Light Headed? Bonk? The dreaded Poo Leg? Cramping? Jot down when and where. These are the things you need to fix. As I’ve mentioned to people before, the Ironman is a thinking man’s race. You can’t just grind through it and expect to have a successful day like you might be able to do in shorter races. Things can turn on you at the drop of a hat, and you need to be prepared to react. One athlete was having a banner day and folks were asking me if I thought she would do this or do that with 1 lap of the run to go. My response was, “I don’t know, everything happens in the last 8 miles”. After the race, I was talking to this athlete, and she was sorta thinking the same thing. The goal was within reach (and was achieved) , but any walking would have been a deal killer.

Most fall into 2 categories – pacing problems or nutrition problems. Often the pacing issues are blamed on nutrition, so make sure you’re being honest with yourself. For the nutrition people, it’s back to the lab and determine a different approach.

Ironman takes a lot of preparation and a good bit of luck to be successful. Just keep in mind that luck favors the well prepared.