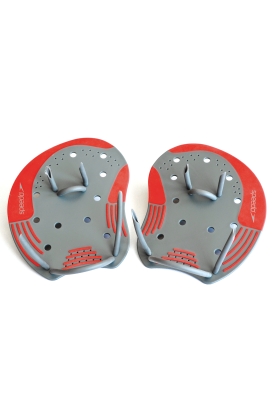 Like most people I’m a creature of habit,  so trying a new hand paddle was a bit odd to me since I have been loyal to Strokemakers for so many years. But when Speedo came out with their IM Tech Paddle designed to be used on all four strokes, I had to give em a try. One of the big problems with hand paddles is that they’re effective for freestyle and rather awkward when you try and use them for the other strokes, and figured the same would be true with these.

The first thing that catches your attention with the IM Tech Paddle is it’s shape. the shape is a little different than other paddles as it has a curved kidney been look to them, rather than the typical mishapen oval of other paddles. The purpose of the shape is so that each stroke will benefit from the paddle. During freestyle you wear the paddle as shown in the picture and  breaststroke you would switch hands. Initially I tried the paddles using freestyle and noticed immediately the difference between my Strokemakers and the IM Paddle. Swimming freestyle with these paddles was odd initally because of the way the paddles directed my hand through the water. it took 100 or so of getting used to before I started getting comfortable swimming freestyle. Once I adjusted it was very comfortable. I also noticed that my pace was not quite as brisk with these paddles, but I must admit that I use a pretty large hand paddle (Strokemaker Blue) so I was expecting a difference.  The gold in these paddles though are in the ability to swim other three strokes. when I reversed the paddles and swam breaststroke and backstroke I immediately saw what they were intended for. Typically in breaststroke for someone to train with paddles they have to use a traditional paddle and size down a couple sizes so that they can control their stroke more effectively, but with these paddles I found that my stroke was very natural right from the start. So I was able to get up and work the stroke right away. No adjustments, no awkwardness, no nothing. I put them on and starting working. Same with back and fly. It was a very natural feel and I could work the pull right away.

After a few hundred yards of swimming with these paddles I found them really enjoyable during all four strokes. The downside?   Not much. The way you fasten your hand to the paddle is similar to most all other hand paddles using rubber tubing to strap your wrists and fingers to the paddle, but one thing different with this paddle is that the rubber tubing doubles back on itself. This created a minor problem for me as it forced my fingers to separate in order to accomodate the extra tubing and started to irritate by the end of my swim. This is not a big deal though as you as you can cut down and adjust the rubber tubing to fit your personal preferences (something I didn’t do), and you shouldn’t be wearing them for an entire workout anyway. Overall I found these paddles to be an asset to my equipment bag and have left them there (something I don’t normally do). I’ve also added them to my regular workout rotation. If you are looking for something different to train all four of your strokes or are needing to focus some attention on your pull, I would highly recommend these. Enjoy your workout.