A little Advice For Your First Marathon

As the weather begins to get colder, the marathon season shifts into full gear and that means tens of thousands of first time marathoners will be toeing the starting line very soon. One of those first timers is my wife.

Almost every year I go down to watch our city’s marthon, the Chevron Houston Marathon, I inevitably see and hear first timers making simple mistakes that can, and often do, cost them their goal of a successful day.

I’ve made all of these mistakes and more in the various marathons that I’ve run. So I would like to pass on some advice in the hopes that I save some people some heartache this marathon season. Below are some simple tips that will hopefully make your day a little easier. Nothing New – For most of those who read this site, the ‘nothing new’ rule is a common one. For the newer members of the endurance world however, this rule might not have set in just yet. “Nothing new” is in reference to your race day habits and equipment. Don’t wear a new shirt, don’t wear a new pair of shoes, don’t grab some gels you’ve never eaten or drink something you haven’t trained with. If you do, you are gambling with your day. Some of these things are obvious. New shoes can cause blisters, as can a new sports bra or pair of shorts. But the smaller stuff can be an issue as well. Same goes with your race day habits. A new hat might drive you crazy. Trying a new nutrtional product on race day might not work for you like it does your training partner. I’ve been in a race where the sports drink on the course wouldn’t digest for me. So I got a big gut full of fluid and got sick. If a gel has ingredients your not used to you could be logging some time in the port-a-cans along the course, or even worse, the dreaded and always feared ‘poo leg’. And no one within a 100 yard radius wants you to suffer poo leg.

Have a good, bland meal the night before. Or at the very least, a meal that you’re familiar with. Spicey indian food is not what I would recommend the night before a race. You want something that won’t irritate, cause heart burn, keep you up at night or having you spend more time than you planned waiting in line for the restroom. Often we travel out of town to race, so a home cooked meal is not always an option. If this is the case, find a restaurant that you know well and are comfortable with. In this situation eating healthy takes a back seat to eating a known food. I often will get a cheese pizza or a burger the night before because I know how my body will react to it.

Don’t let your enthusiasm ruin your race. I know this sounds easy to avoid, but most runner’s go by feel (or RPE) on race day as opposed to heart rate. Not a big deal, with the exception of that wonderful little drug known as adreneline. At the beginning of the race, excitement is in the air and your goals are at their height. So the gun goes off and you feel great. Yippee! All that training paid off and you are going to have a banner day. You feel like you are running an easy pace….until that adreneline wears off. No biggie at first because you knew the race would have it tough spots. By the time you roll through mile 16 though, you know that you’ve screwed up, but at this point it’s too late. Dragging home is the best option you have.

The best way to avoid this is to have a plan for the first half of the race. Pick a pace that’s conservative and stick with it regardless of what the rest of runners are doing. This can be harder than you might think though. It’s called a ‘pack mentality’ for a reason afterall. It’s not always necessary to have a plan for the later miles, as at some point you shift from holding back to pushing through, and digging deep doesn’t come with a plan.

Don’t over dress. It’s 5 am and 31 degrees outside. You step out of your car and realize it’s dang cold. It’s only natural to throw on a jacket or some warmer tights so that you’re comfortable. The problem comes later in the day, when it’s 9am and now 48 degrees. You went from comfortable to overheating and sweating through all those warm clothes. So rather than start your day comfortable, trying toeing the starting line a bit cold. Even a little shivering. Your body temperature will elevate within a matter of minutes of starting and that cold air will feel pretty refreshing soon after you start. If the weather is too cold to do this, then start with an outer later that you can throw away as you get going. For instance, you might notice a number of people wearing gardening gloves at the start. The reason is that they cost about 50 cents and won’t be missed when they’re tossed in the trash at mile 5.

Breathe. I usually get a blank stare on this one, but it’s the most overlooked and perhaps the most important piece of advice I can give here. With the start of a race, with all the people and all the noise, racers get so distracted that they often begin a very shallow breathing pattern, even to the point of a pant. In a triathlon if you do this it usually ends up as an anxiety attack in the water. It’s certainly not as severe on land, but can wear you out in a hurry. Get yourself into a ryhthmic breathing pattern right from the get go.  Ask the top runners what they focus on while racing and the majority will tell you it’s their breathing. There’s a reason for that. 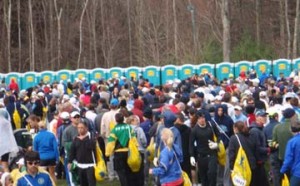 Take care of your business before you head to the starting line. Yes, that is what I’m referring to. This one takes more planning than you would think. I’ve never seen the cost analysis for this so I’m not really sure why, but one thing races never have enough of is port-a-cans. The lines can be enormous. Because of that, I do everything I can to avoid them. I really don’t want to stand in line for 30 minutes right before I race. My suggestion would be to do a little recon and see if there are any restraunts, hotels, etc. nearby that you can sneak into. If there are no options (like the Boston Marathon for instance), then get in line early and often. Better to take care of your business before the race then scrambling to figure it out at mile 15.