In an earlier post I discussed my purchase and thoughts on my bike trainer, the Kettler Ergo Racer (link here). I mentioned in that post that purchased some training 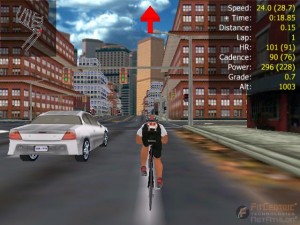 software along with the trainer called Netathlon 2.0 (NA). This software connects up with a number of trainers and stationary bikes and essentially takes control over the trainer’s settings, allowing you to have an interactive ride. There are a number of computer animated courses to pick from (you must purchase each course, but can preview the course before you buy) and NA will give you gobs of feedback. It shows you speed, power, cadence, heart rate, calories burned, elevation, distance, etc. It will will also save any of your rides so that you can race yourself in future rides. I have loaded 5 previous rides at once to race and had no problems. I have heard that you can load over a dozen, but have never tried it. Another great feature of NA is that is also allows for drafting, and it actually feels like drafting. I have sat in on a pack ride and actually soft pedaled to stay on the wheel of the person in front of me.

The courses offered are impressive. The Kona bike course is right on the money. The turns and hills are all where they should be and the scenery is accurate as well (you can pan your view and check out the mountains and the ocean on each side of you). I can actually see the hotel I stayed in when was there when I’m riding the course. Same goes for some of the other courses. They have an Alp’d Huez course complete with cheering fans that I’m actually a little scared to ride.

One thing that I have found particulary interesting is that you can connect to the internet and race/train with others. Want to ride the Kona course with your buddy who lives 2000 miles away? Hook up the headset (if you want to talk) and meet him online for a ride up the Queen K. This feature seems to be quite a hit as there are groups online that have regularly scheduled rides in which dozens of people meet up to churn it out. I’ve even seen links to racing leagues.

Having said all that, Netathlon 2.0 is not without it’s flaws. First of all, installing it was more of a challenge than I bargained for. It was a bit buggy, and I needed the folks at NA to reset me and help me a couple of times to get me up and running. It also (initially anyway) was buggy with the upgrades. Running Vista, I downloaded the latest 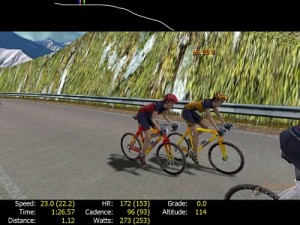 patch and lost the graphics to the courses. After many attempts they got me fixed and it seems they have stablized their product.

The other issue I have with Netathlon 2.0 are the number of courses that are offered. I love the ones that they currently offer, but I haven’t seen a new course in at least 2 years. If the folks at NA were wise, they would create and sell an application that allows us the user to create courses and share them. If they did that you would see virtually every bike event in the world become available overnight. This thing could become a massive hit if they would just let it.

At the end of the day, I would recommend Netathlon 2.0 to anyone who has a trainer and can’t stand riding indoors. I would rather do anything than ride indoors and with NA I’ve had an hour ride just fly by. And who knows, maybe I’ll see you out on a cyber ride one day. I’ll be the guy sitting on your wheel.

EDIT: I forgot to mention, for you loyal Computrainer users, it’s fully compatible.