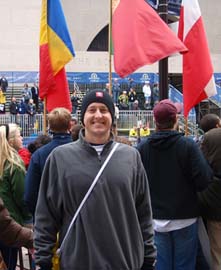 As some of you may know, I ran in the Boston Marathon this year. It was an event I have wanted to experience, and with the birth of our second child, I thought the training would be more manageable than some of the other events I usually look to. Truth was that even with just one sport to train for, a newborn and a one year old in the house are just not very condusive to consistent training. Such as life. Didn’t expect to break my 2:41 PR anyway.

Another bonus to this race was that I got to stay with an old friend/teammate from college and meet her family. It was great to catch up and meet her husband and little kiddo. It made the trip very enjoyable. Anyway, the race..

The race is point to point and they bus everyone from the finish in Boston to the start in Hopkinton. I’m not sure how it takes a bus on a highway an hour and a half to go 26 miles to the start, but I’m sure glad I used the restroom before we left. They drop you off in the ‘Athlete Village’ which is basically the school grounds near the start. They have a little food, a few announcements and a ton of port-a-cans. 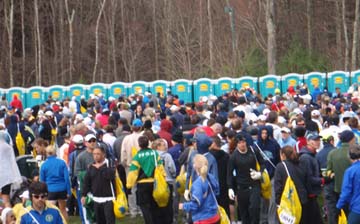 Most people seemed to be doing one of two things, either waiting in the longest port-a-can lines I’ve ever seen in my life, or sitting down trying to stay warm. For those who plan to do Boston, be aware there are no seats, so bring a blanket or something to sit on and you’ll be fine. After about an hour or so, it was time to head to the start.

I lined up in corral #6. They have about 1,000 people per corral and it’s seeded by your qualifying time. I learned later that the time difference for my corral was about 2-3 minutes, So essentially, we all had the same time. The race starts and it takes a few minutes to get to the starting line, something I’ve never experienced before. Kinda a hurry up and wait sort of thing. We got running and it was shoulder to shoulder for about 4-5 miles. Saw lots of people peel off into the little sections of woods to pee. Since I didn’t know how populated the rest of the course was, I did the same so I wouldn’t be looking for a port-o-can later on. I also didn’t realize it at the time, but I tied my left shoe too tight. I had to stop twice to loosen it up. Not a big deal but an annoying interruption. Legs felt good early on. My strategy was to be ultra conservative until I got to the top of heartbreak hill. Then I was going to hit the afterburners and destroy the last 5 miles. The reality was that the downhills destroyed my legs over time, so by the time I got to Newton for the 4 hills, I was actually looking forward to an uphill. At the top of heartbreak hill my legs here pretty much finished. So I shuffled the last 5 miles into the finish. My time was about 12 minutes slower than my qualifying race, but I was pretty much expecting that.

The real story though is the race itself. What an experience. I have never seen crowds so big for a race. There isn’t a spot on the course without crowds of some sort. I really tried to soak it up. Each town you ran into, the crowds tripled and the noise level was fantastic. The noisiest spot without question is Welsley College. I could here those girls screaming from a quarter mile away. They were all holding signs like ‘kiss me, I’m a senior’ or ‘free kisses’, etc. One of the runners next to me decided to take one of the more striking girls up on her offer. Instead of the typical peck though, this girl grabbed the runner and went to town! the guy stumbled off with a big smile. While it was great fun to watch, I decided not to partake. As I mentioned before, I was about 6,000 people back, so I wasn’t too jazzed about the thought of the hundreds of others this girl had already kissed. Not into sloppy 2nds, let alone sloppy 300ths. At the bottom of heartbreak hill, I decided to take a group up on their makeshift ‘beer aidstation’. Why not? Legs were shot, time was no longer an issue and beer tastes great. The last 3 miles entering town the crowds got progressively larger until the final left turn to the finish. There is about a half mile straight to the finish line and it is just solid people. Good fun. I finished and began to freeze my butt off. I figure the locals didn’t think anything of the cold, but I thought I was going to die. The walk to get my warm ups might have been tougher than the race itself with that cold air and strong wind.  My legs tightened up so much that it hurt to take every step. I spent the rest of the day walking around like a 98 year old man.

When it was all said and done I was very happy that I got to experience this event. I know there are many out there who try every year and still can’t qualify, so I feel blessed to knock it out on my first try. For those considering this race, I give it two big thumbs up. Will I go back? Hmmm. Not sure, but I doubt it. I didn’t grow up a runner, so I went to soak up the experience, mark it off my bucket list and move on. But who knows, maybe I’ll get the itch again someday.