So I’ve been watching this year’s Giro d’ Italia, which admittedly is the first time I have ever watched it. Two main reasons being that 1)I now have same day television coverage and 2)Lance is racing again. While I know his job is to help Levi win, I was still surprised with how poorly he did in the time trials and mountain climbs in the first 2 weeks. I kept thinking that there is no way he’ll be ready to France. The third week, though, has slowly started to change my mind. He’s climbing better, staying with the leaders, and even attacking them some. This is also a tour that is laid out and riden much differently than France’s. Climbs are steeper and time trials are much different. While I still think he has a ways to go, I’m starting to think that he might get into enough form that he can fight for yellow. 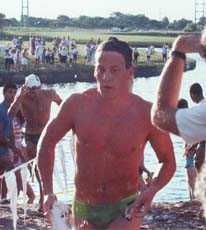 Lance as a Teen

Growing up in Texas, I had the privilege of racing Lance in his early years as a triathlete. Well, I was racing and he was racing, but he wasn’t exactly looking over his shoulder for me (only once did I make it close). As a teen he was absolutely amazing. At 15 this guy was a professional triathlete and was leading top pros like Mark Allen and Mike Pigg into the run. It was just unheard of to do what he did at that age. So when I read that Lance was scrapping the swim and run and joining the world of cycling, do you know what the first words out of my mouth were?

There was no doubt in my mind that was going to become an all time cycling great. It was as obvious to me as the sun in the sky. Now I had to wait nearly a decade to be proven right, but man was I right. 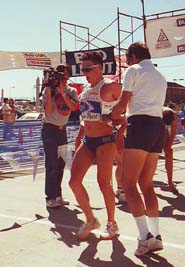 Lance has been followed around since his first win under a cloud of suspicion on whether or not he uses performance enhancing drugs to be that good. 7 tour wins and not a single positive test from the most tested man in all of sports and he’s still not in the clear. But the fact that he’s willing to go back into the lion’s den of the french media and race again tells me that he’s not all that concerned with the accusations. Nowadays, if you do great things people are just going to wonder. I’m no different. I saw this guy do amazing things from the start and I still wonder if the rumors are true.

So will Lance win number 8? Well, he’s got a few things on his side. First of course are his genetics.  That might help him overcome some of his age, because he be racing people 10 years younger than him. He also has, at least as I type this, a strong team. Hopefully they’ll get their sponsor problems cleared up in time. Above all else though, he has a crazy work ethic and knows how to win this race.

Will it happen? Not as sure as I used to be about that question. If I had to bet on it, I would put him somewhere on the podium. Can’t wait to see where on that podium he ends up.