Overcoming the Fear of Swimming in Open Water

Let’s face it, of the three sports that make up a triathlon, the swim is really the only one that people consider ‘scary’. And they have a  legitimate right to think that way. The water is often cloudy, so you can’t see where you’re going. The start is crowded and you get kicked, hit, and sometimes swum over by your competitors. Can you imagine a 5K run where you kicked and punched all the runners around you for the first 100 yards? Add all of this to the fact that if you stop swimming you can drown. It’s no wonder why I hear so many people tell me that they would love to do a triathlon but they’re too nervous about the swimming portion.

Many people commit to a triathlon and then proceed to have a melt down shortly after the start of the swim. I run an open water clinic every year in the weeks leading up to a big sprint race in the area and without exception there are a number of people who have an anxiety attack just 30 yards into our dry run of the course.

In the years that I have put on these clinics, I have learned some of the most common causes of anxiety in an open water swim. Hopefully this will help you get through the swim and onto your bike.

Breathing – 95% of the problems are breathing, and its not a physical thing, it’s mental. First there’s the anxiety. Most people are a little panicked in murky water with 100 other people and tend to get overwhelmed at the start with arms and legs going everywhere. The jump in heart rate with a dose of anxiety leads to hyperventilation and panic.   People also hate getting lake water in their mouth so they don’t exhale underwater. Instead they exhale AND inhale when they turn to breathe. That causes very shallow breathing and they end up out of breath. Finally, there’s the rough water as was mentioned. Poorer swimmers stop altogether to get a clear shot of air, but most won’t rotate enough to breathe and end up with a mouth full of water (see above).

The Unknown – It crosses everyone’s mind, but only a few admit it. Cloudy water brings horror movie type thoughts (I would love to know how many people won’t swim in open water because the movie JAWS ruined them for life). When it comes to animals there is almost nothing to worry about. Snakes, turtles, fish, etc are scared of us, so the last place you will find them is close to 900 people swimming in a lake. The other big unknown is the bottom, and what’s down there. Branches? A tree? A car? A monster? A body??. While I can’t speak to every body of water that we swim in, here in Texas where I live we have more lakes than Minnesota, but there is only one natural lake. Yep. One. That means there is a very good chance that the lake you are swimming in was planned, engineered, cleared and filled. So relax a little. If the swim start is in at a public beach or park, there’s not a lot of unknown down there. 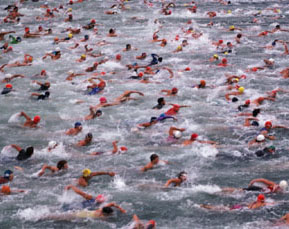 The Course – The vast majority of people entered have swum the distance at the pool and are very comfortable. 500 yards is a piece of cake when you break it into 20 lengths of the pool. Take that same 500 yards and drag across a lake and it can make you rethink things. It’s pretty common for me to see the swimmers head off swimming parallel to the shoreline doing just fine (after all, they’re only 15 yards from land), but that first turn away from the land and out into deep water will stop them dead in their tracks. My advice? Instead of doing a 500 in the pool to prepare for a 500 in open water, add another 25% to the distance and make sure that you’re not resting on the walls during the swim. The other to approach it is to swim a 500 to prepare for a 500, but do the whole thing without touching a single wall. It’ll force you to tread a little water just like you’ll have to do when you’re in open water.

The People – To be honest, this one even makes me a little nervous and I’ve been doing this for over 20 years. All those people, all those arms and legs, and all that energy. The best way to avoid getting tangled up in the start is to seed yourself properly (or even conservatively for those with an inflated sense of their swim skills). Unlike running races, its not very easy to just swim around someone, so the chances of getting run over is pretty good if you start in-front of faster swimmers. The other problem is that we crowd the starting line and wait for the gun treading water in a vertical position. When the gun goes off we all get horizontal in the same amount of space.  This makes it nearly impossible to avoid bumping into others. So be sure to give yourself room. If that means you start 10 yards back or wait a few seconds before you put your head down and go then so be it. You’ll easily make that time back since you won’t have to fight for space.

Of course this isn’t a complete list as everyone has their own personal demons to deal with, but they are the most common that I run into. Bottom line: if you just rationalize the situation that you’re in, you should be able to achieve some level of comfort out there and turn a scary experience into an enjoyable one. That is, of course, assuming Jaws doesn’t swim up from the deep, murky, waters and eat you whole.