Recently I took a trip over to Germany with my wife to attend a wedding of some friends of ours. We got to know the couple through endurance sports (more specifically, Ironman), so it was no surprise that there would be others at the wedding with the same common interests. Usually in a situation like this I feel fairly comfortable in my surroundings. After all, I’ve done my share of long distance racing in various locals around the world, so I should be able to participate in a given conversation. This time however, I was mistaken.

Upon arrival to this small German town outside of 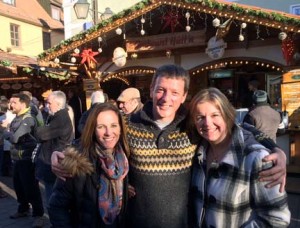 Munich, we were immediately introduced to this great couple from Wales. As we got to talking, and I got to listening, it turns out our new Welsh friend Nigel took up the sport of running just 3 short years ago. It helped him quit smoking (used to pull on a cigarette right before the start of a race! ha) and got him healthy. When I inquired about the types of runs he’s done (you know, “Have you tried a marathon yet?”), he told me about some of the 100 milers he’s done, the multi day races, the Spartathlon, and on. And on. Huh… Didn’t see that ‘I need to get healthy’ story going that direction. I sat quietly (well, quietly for me), and listened, and learned.

Nigel is very easy going and he and his wife were great company to drink beers with, and from talking to him you’d never know that he eats nails for breakfast, which makes it all the better. But the story didn’t end with Nigel. Not by a longshot.

The following day was the wedding, and at our table, along with our new found Welsh friends, was another unassuming couple. The man was from the UK and his wife was from South Africa. As I begin chatting it up with them with the obvious small talk (How did you two meet?), I soon realized I just met a man I won’t soon forget. Turns out Roger met his wife while he was at port during a boat race. He was in New Zealand to restock and told his future bride that she was invited to 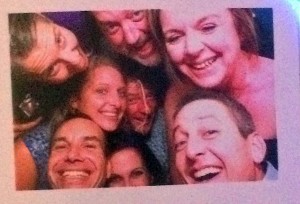 a party back in the UK when the race was over at the finish in 6 months.

“Oh it was a race around the world” he replied.

(Knowing immediately what I thought he was doing). “You raced the Volvo?? Wow!” (The Volvo Ocean Race around the world is commonly known as the toughest endurance event PERIOD.)

“Actually, no it wasn’t the Volvo. The Volvo circumnavigates the world the easy way. The race we did went in the opposite direction”.

So, of course, I was going to lean in on this, and I began peppering more questions.

“So how was that? Where was it the toughest? How’d you do?”

“Oh it was quite a trip. We got in an area down by Antarctica where the waves were almost 100 feet. And the challenge there was that we couldn’t just ride through them with our 60 boat. Rather we needed to ‘surf’ down them or the boat will just free-fall after cresting, so it was quite a rough ride.”

“Geez!” I replied. “That must have been a rough go. So how long did that go on”.

“It lasted about 9 weeks”

Timeout. 9 weeks with seas producing 100 ft waves. Let that soak in for just a minute. I went offshore fishing in Mexico with a buddy one time and the 10 foot waves started making me a little queasy after an hour. 9 weeks. I would literally barf myself to death. Hypothermia would seem a very peaceful way to die at that point.

“While we were down in there (Antarctica), one of our crew members had gotten very sick with kidney problems. The issue is that there is nothing close if you need help. Nothing. So our contacts started radioing us instructions on how to perform the surgery for her. None of us were doctors, so we weren’t comfortable with that, but our radio contact told us that we shouldn’t worry about that. ‘She’s going to die if you don’t perform the surgery, so if you do it wrong and she dies, then it’s no big deal because she was going to die anyway. We pressed for another option, and they offered up a naval boat heading to restock supplies down in Antarctica, so if she could hold on that long, then could pick her up.

They made it, and the chopper gave instructions to have her harnessed and ready to be clipped on the deck. They dropped someone on a line to come and pick her up, and that guy was on our boat for no more than 2 seconds. He dropped down, clipped her in, and they both took off. It was impressive.”

(side note of interest: The girl was taken to a resupplying island where she was operated on and recovered fine. The problem for her was that this island wasn’t a regular destination, so she ended up stranded there for 3 months until the next vessel came.)

I was doing my best to soak this all in, but at the same time had more questions. But he continued..

“When we got to the US, we went to dock in Boston, but they kept us offshore at first. They made us remove our clothes and burn them..”

(Side note: As one would imagine in a situation like this, the crew was a bit ripe after being at sea for so long. So much so that their hair started growing through their clothes. We all asked about a change of clothes and he said, “what’s the point?” 9 months at sea. Whether you have 1 shirt or 5, it’s not going to take long before all are in the same condition. He made a good point)

After the clothes, they had to destroy the food, and then the boat was fumigated. After they got the all clear, they were allowed to dock and restock for the remainder of the race. 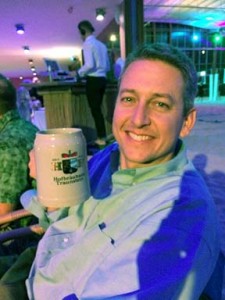 In the end, they finished the race and had a big party. And at that party you’ll never guess who flew halfway around the world after getting an invitation 6 months prior.

And that’s how they met. Beat that “How did you meet?” story. I dare you.

So the obvious question in my mind came next.

“So what do you do that allows you to take 9 months off of work to sail around the world?” I asked.

“Oh, I’m a test pilot for the British Military”.

He continued on about how that job came about, some other great stories, and threw in a few well placed jabs on American beer. It ended up being a great night sandwiched in the middle of a great trip. Certainly traveling almost halfway around the globe for a wedding isn’t the most common thing you hear about, but back when we were debating the decision, we decided that it would be a great adventure to look back on. As it ended up, we got some great lessons of adventure in the process.