How To Eat That Elephant 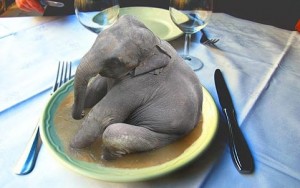 As I mentioned in a previous post, I was debating whether or not to sign up for Ironman Cozumel. Well, sign up day arrived, I got caught up in the excitement and ended up pulling the trigger. The last time I raced an Ironman was 2006 in Hawaii. I’ve started to get the itch to do one again, so I am looking forward to getting back out there. Which brings me back to my main thought.

This is the time of year in which athletes and non athletes alike take some time to endulge in all the wonderful things that the holidays have to offer. With that brings a bit of guilt, and that rolls right into New Year’s and the infamous New Year’s Resolution. Year in and year out the number one resolution in this country is to workout more or to get in shape/lose weight. For many (including myself), this means committing yourself to an event such as a marathon (or an Ironman).

Gone are the days that you could decide to enter a major endurance event such as a marathon 30 days before the race. Marathons are filling up 6 months to a year out and Ironman races can sell out in as fast as 25 minutes, a full year in advance.

The drop out rate for the very popular marathon training programs are ridiculusly high. People sign up with great intentions, hit the ground running with some big runs early on and then burn out just as fast. The success rate would be much higher if people just approached it differently. They’re trying to eat an elephant in a few bites and we all know that’s not how  it’s done.  If you want to finish a marathon, you need to do it one mile at a time.

Here in the Houston area, where I live, most of the marathon programs start in early to mid July for the Chevron Houston Marathon that takes place in mid January. For the average recreational runner, 6 months is plenty of time to ramp up for a marathon, but many of those signing up are starting from stratch in July. Not a good idea, because you have to start covering some pretty big distances in a hurry, and that can be quite overwhelming.

I would suggest that if you think you want to run a marathon, start the training now, but start in very small doses. The key to success in any endurance event is consistency in your training, not how early you can go big. So, instead of trying to kill the world right away, spend the first few months just getting into a habit. Telling you to get out 3 times a week and run 1-2 miles each time for the first 4 months sounds a lot more palatable than to tell you that in just a few weeks you must be able to run 8 miles.

Same thing goes for intensity. There is no reason in the world that you need to hit the track and do wind sprints or interval work if you are trying to finish your first marathon. No one out there walking/jogging in the final miles on race day is wishing that they had done more speed work instead of endurance work. Plus, the rate of injury goes through the roof when you add intense workouts to your training program.

The same philosophy holds true with any endurance event, not just a marathon. If you decide you want to do the MS150 or local 100 mile bike ride, an adventure race, or the Ironman, take small bites from very early on. Because if you start too big, you are going to start to hate the training and there’s a good chance you won’t even make it to the starting line. What ever ‘mountain’ you decide to to climb, remember that it’s small steady steps that get you to the top, and that, “Joy is found in not finishing an activity, but doing it”.*