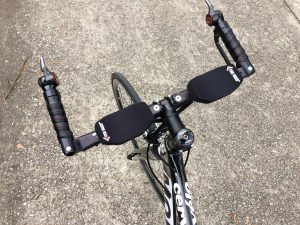 This week I had the chance to test the Morf-Tech protype handlebars. For those not familiar with them, these handlebars actually change, or morph, from upright bullhorn bars to full aero via a clever locking mechanism within the bars themself.
I first learned about the concept more than a year ago from the creator, Frank Springett. A mutual friend, Greg Kam,  put us in touch, and he discussed his idea with me. I’ve heard quite a few ideas over the years, most of them having too much hair and warts to have any real chance. This idea however had teeth to it. I could tell he knew his mechanics, and we knocked around the rules, standards, the usability, and the various pros and cons. He had a wood version at the time to illustrate the idea better. Bottom line was that I thought he had a great idea if he could bring a working model to fruition (which, truth be known is usually a very tall order that an idea guy is also a production guy).

Fast forward to a few months ago. I had mostly forgotten about the conversation when I received a message from Greg, our mutual friend, telling me they have a working model, are showing it around and he wanted me to test it out. After some back and forth on dates, I finally got to try it out. 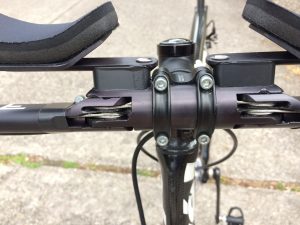 At first glance it looks like a old time trial bike from the 80’s. Simple bull horn TT bike. At the base of the grips (on each side) there are two small levers. With a simultaneous push inward, the locking mechanism is released and the bars are able to be extended out to a full aero position. The first couple of times it was a little awkward, as it’s just not something you’ve ever done on a bike, but it really becomes quite intuitive very quickly. The release lever is pressed with your ring or pinkie finger in an inward motion as opposed to a squeezing motion, which is quite smart because it’s very deliberate and not done by accident. Once released, the bars move freely to any position you prefer, but in tandem, meaning that you can’t have one side in aero and the other pulled back as a bullhorn.

I got comfortable changing the positions in about 300 yards. Spent the rest of the time trying different positions and scenarios (cornering, shifting, stopping, etc). The video of part of the ride is here.

Here are my thoughts in no particular order.

The idea is game changing. I felt more stable and safer riding than a tradition tri set up. The hands never need to leave the brakes or the shifters. So intersections, corners, climbing, and group riding all take on a different feel. I envisioned a pack of riders all with these bars and how that would change the 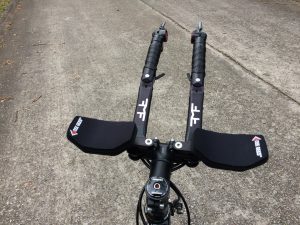 dynamic of the ride.

I immediately got more aggressive on the corners. Think about the way you corner. Ride in aero, scan the road briefly for hazards so you can shift your hands from aero to brakes, then you corner and get back to aero once you are back up to speed (and crack/gravel/bump free). By the third corner this had already changed. I ride into the corner aero and at the last second as I turn, I move the bars in one fluid motion, then back again. Hard to put into adequate words, but it was noticeable out there. Same mindset would apply to railroad tracks.

They are comfortable. The storyline of this product is moving from bull horn to aero. What is left out is possibly and equal storyline. You now have many, many positions to work with. Almost immediately I found the same position as riding on the hoods of a road bike. Tired of full aero but don’t want to sit up and catch all that wind? Open the bars about 4 inches and lift your arms off the pads. It was really refreshing. 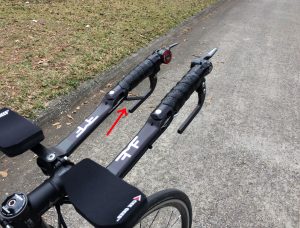 I don’t have any tests (They don’t either just yet), but this set up has got to be one of the most slipperly set ups in a wind tunnel. You literally remove the bull horn bars from the wind when you’re in aero. I’d bet it will be the equivalent to the benefits of a disc wheel.

There really weren’t any drawbacks that could think of. Really just for me personally, when I climb from a seated position, I put my hands on the top of the bars (next to or under the armrests), just like any roadie. That position is just a tad tight and likely an easy adjustment fix on my end. I’m nit picking, I know.

On the roadie front though, consider this. They have a mock up of road bars (see image). What if you sat in the pack in the standard configuration, then when you take your turn up front you could tease those ho 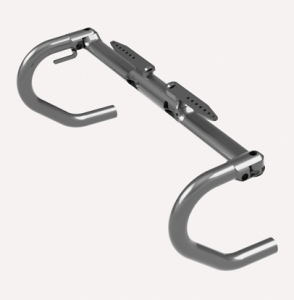 ods forward, in a quasi aero position, yet never leave the drops? Right now roadies rest their forearms on the bars and their hands just dangle, holding nothing. Game changer. Safer road races AND more aero. Hope the UCI will agree.

For those who want to get your hands on a pair, they are hoping to have them ready for order very soon, with a retail price somewhere around the $499 mark.

(Full disclosure: I have no affiliation with them, nor am I compensated for this article. But I’m open to some preferred stock…or a set for myself.)